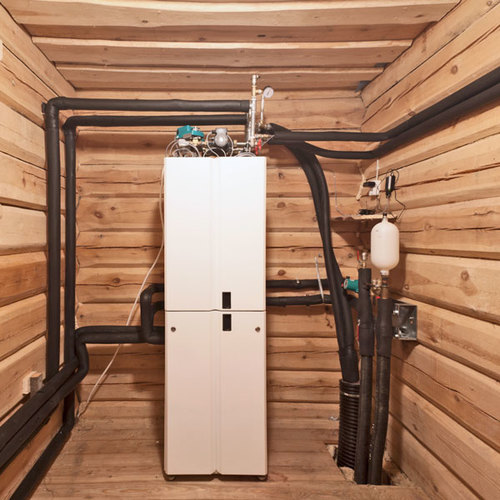 Using geothermal energy to heat a home, business or school building used to be a rarity, but in recent years we’ve seen an increase in property owners making the switch to geothermal heating as a way to cut down on their carbon footprint and run a more energy efficient building.

Skillings & Sons does not install the heating system, but our experienced team of technicians works with the heat pump technicians on everything outside the building, from drilling the well to installing the piping into the home. We’ve put together a geothermal FAQs page on our Skillings & Sons website that includes more accurate information about the well drilling process. But for those who want to know the basics, we posted some information about geothermal heating systems and geothermal wells.

1. Geothermal heat systems are low carbon
A geothermal exchange system uses the earth’s natural, relatively constant thermal temperature to heat, cool and provide hot water for a home or business. The ground heat exchanger transfers the warmth from the earth into the home through a series of pipes buried in the ground. The heat pump connects the underground portion to the inside of the building, and the delivery system is the ductwork or radiator that transfers the warm air throughout the home.

The heat pump is powered by electricity, but besides that, the system needs no other fuel. For many homeowners, the appeal of a geothermal heating system is two-fold. Not only do they save up to 70 percent on their utility bills, but they are cutting down on the use of fossil fuels, like oil and natural gas, that most New Englanders use to heat their home or business.

2. Geothermal heat systems can be installed in many kinds of buildings
Some people call us looking for a green heating option for their farmhouse. Others are looking for an efficient way to heat a renovated school building. There are many different reasons for choosing geothermal heating, and we’ve heard from property owners and property managers both in rural and urban settings.

We have installed geothermal exchange systems in commercial and residential buildings across Massachusetts, New Hampshire and Southern Maine, including the Pease Air National Guard base. In 2006 during work on a nursing home, we installed one of the largest geothermal wells in New England with 16 bore holes at 1,500 feet deep.

3. Geothermal heat systems qualify for subsidies
The federal government has passed some laws in the past ten years to incentivize green energy infrastructure, including the cost for energy efficient and low-carbon home heating units. Geothermal heating and cooling systems tend to cost more to install than standard fuel heating systems. However, federal and local incentives can cover up to 60 percent of the cost.

4. Geothermal wells can be drilled on small lots, too
When people learn about how geothermal heating systems work, they often assume it requires a large piece of property and open space. That’s not always the case.

A closed vertical loop acts in much the same way, except the pipes, are sealed and a special anti-freeze fluid is circulated inside, moving the heat from under the earth’s surface into the home.
Because the well and system pipes are drilled vertically, they can be installed on a relatively small piece of property, depending on the landscape and soil type.

5. Geothermal systems can be used for more than heating
Geothermal systems can also heat the home’s hot water and provide cool air in the summer. Because the earth’s temperature remains constant throughout the year, transferring warm air out of the home and air cooled by the earth into the building has an air-conditioning effect.

Skillings & Sons, Inc. has more than 40 years of experience drilling wells in New England. We’ve invested in high-quality equipment capable of breaking through the bedrock to make the most of the earth’s natural energy and our technicians are IGSHPA certified. Please call today to talk to one of our technicians.